8 Non-Touristy Things to See and Do in Montreal 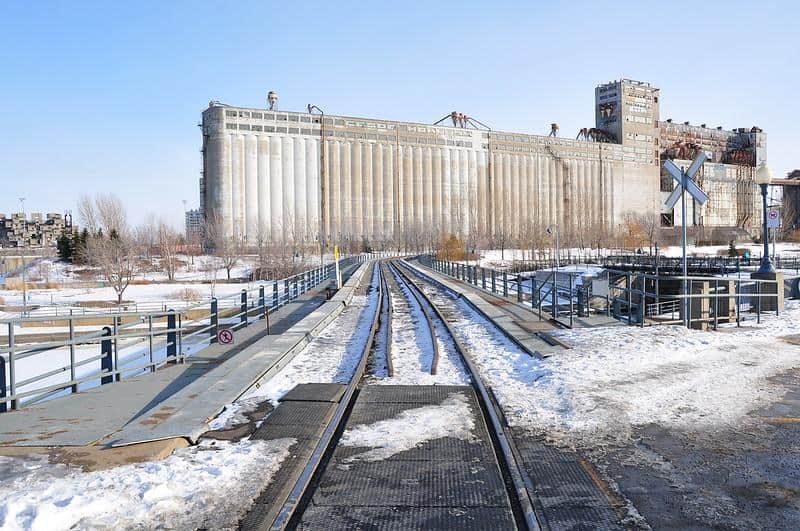 A wintry view of Silo No.5

The second largest city in Canada and the unrivaled economic and cultural heart of the French speaking province of Québec, Montreal attracts many visitors annually as it offers a lot of activities and places of interest, thereby, even once oddities like Habitat complex or Gibeau Orange Julep are now overwhelmed with swarms of tourists. All of those once off the beaten path places are still recommended to visit, yet if you wish to feel a small sense of authenticity, here are some relatively undiscovered things to see and do around the city. 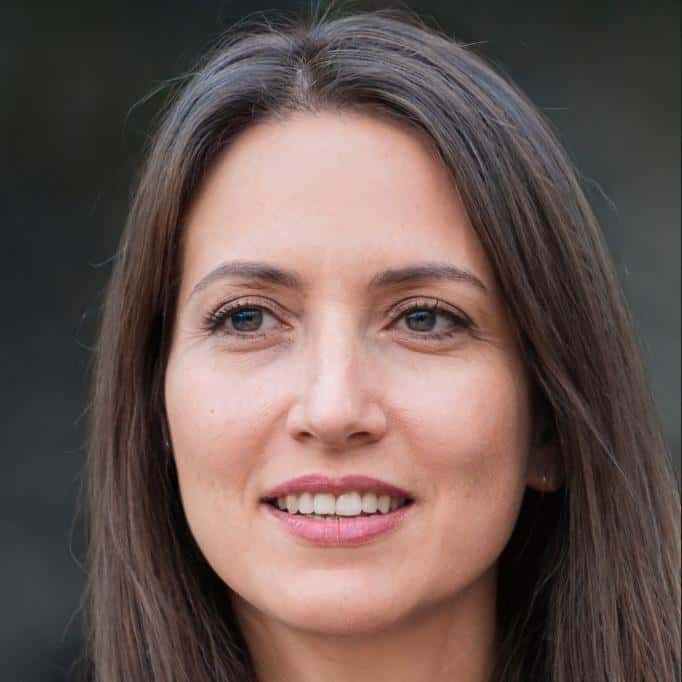 Montreal, like every major city nowadays, has markets attracting foreigners who are looking to purchase souvenirs or fresh groceries, usually transforming them into tourist hotspots, while it’s not necessarily a bad thing, some of you might be looking to visit a market which is more popular among locals, one such market is the Maisonneuve in Mercier–Hochelaga-Maisonneuve borough.
Built in 1912, the original market occupied a lavish building, presently functioning as a community center, only meters away from its current location. It closed its doors in the 1960’s to be reincarnated 20 years later as a farmers market and yet again as a public market in 1995. Today it’s one of the best places to indulge on local delicacies and buy unique food items, not found elsewhere.
The market offers a large plethora of locally grown products from small farms like vegetables, fruits, cheese, bread, meat and especially flowers and herbs, whose mood lifting scents waft throughout the building, somewhat intoxicating. 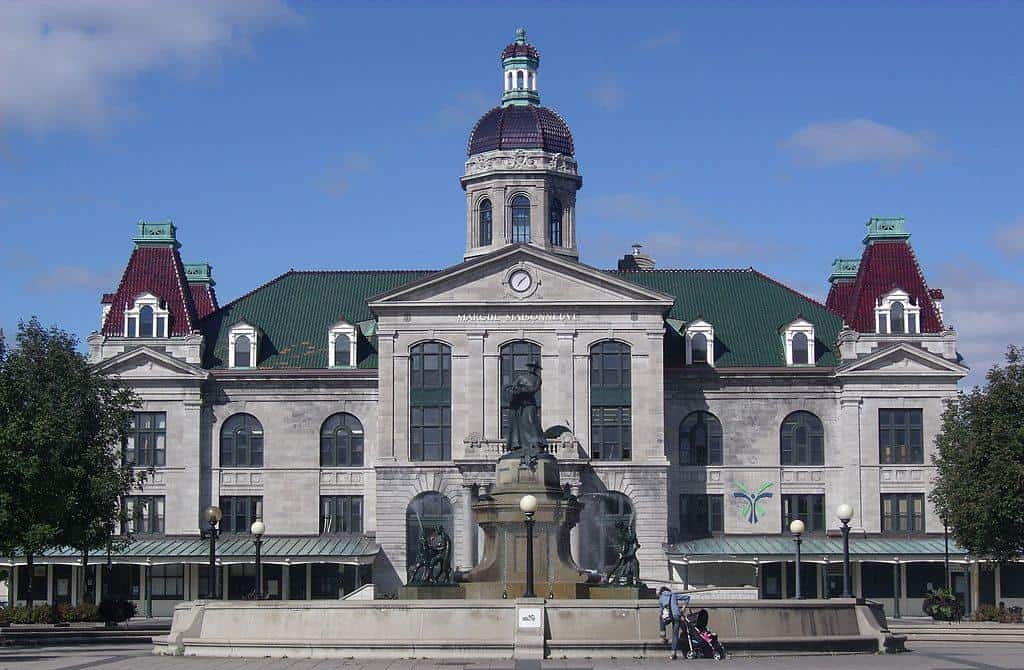 Montreal is well known for coexisting with its surrounding wilderness by having an extensive network of reserves, sanctuaries and parks, showcasing pieces of untouched nature.
Des Rapides Park is one of those places where it’s possible to witness nature at its full glory without actually leaving the city.
Nestled along the St. Lawrence River, the park is named after the nearby Lachine Rapids, visible from the grassy banks on its narrow water-surrounded paths. A century ago, the river’s strong currents were utilized by a hydroelectric station to generate electricity, though today little remains of the station which was demolished in 1948.
The rapids sheer magnitude makes the park an ideal location for rafting, but even if you aren’t such a thrill lover, you’ll find the energetic white water very appealing spectacle to watch.
Additionally, Des Rapides Park and the adjacent Heron Island form together a migratory bird sanctuary, home to 225 species, including the great blue heron, so make sure to bring a pair of binoculars to spot some of those adorable fathered creatures. 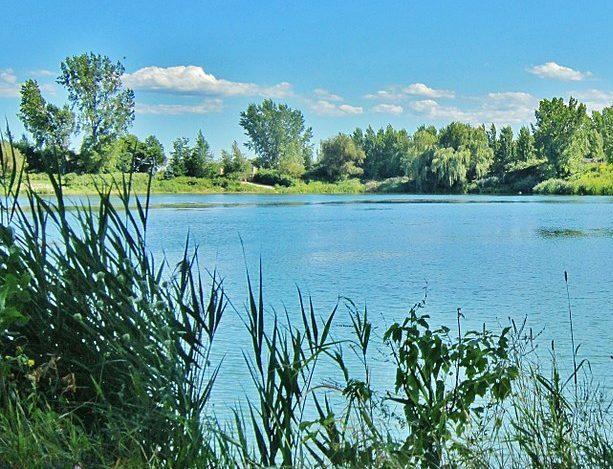 Tucked away at the middle of St. Lawrence River, the island of Dorval is perhaps the most mysterious place in Montreal, even by local standards. According to 2011 census the island had a population of 5 people, making it the smallest municipality in Canada, nevertheless, the unofficial figures are estimated to be slightly higher, since not all residents are registered or permanent.
There are no paved roads throughout the island, thus it‘s practically considered as car-free zone, yet since its miniscule size is roughly 0.2km2, riding a bicycle or walking can get you anywhere within few minutes.
Reaching the island is probably the most challenging part, partly because most of the time it’s cut off from the mainland, connected only by a seasonal ferry service operating between May to October (06:30AM-00:00AM), from the pier in the town of Dorval, not to be mistaken with the island itself. The ferry can be boarded solely by property owners, residents or invited guests, hence makes the island extremely difficult to access, however, if you wish to explore this arcane speck of land regardless of the obstacles ahead, it’s advisable to contact the municipality via their website, or even shamelessly speak to embarking passengers. 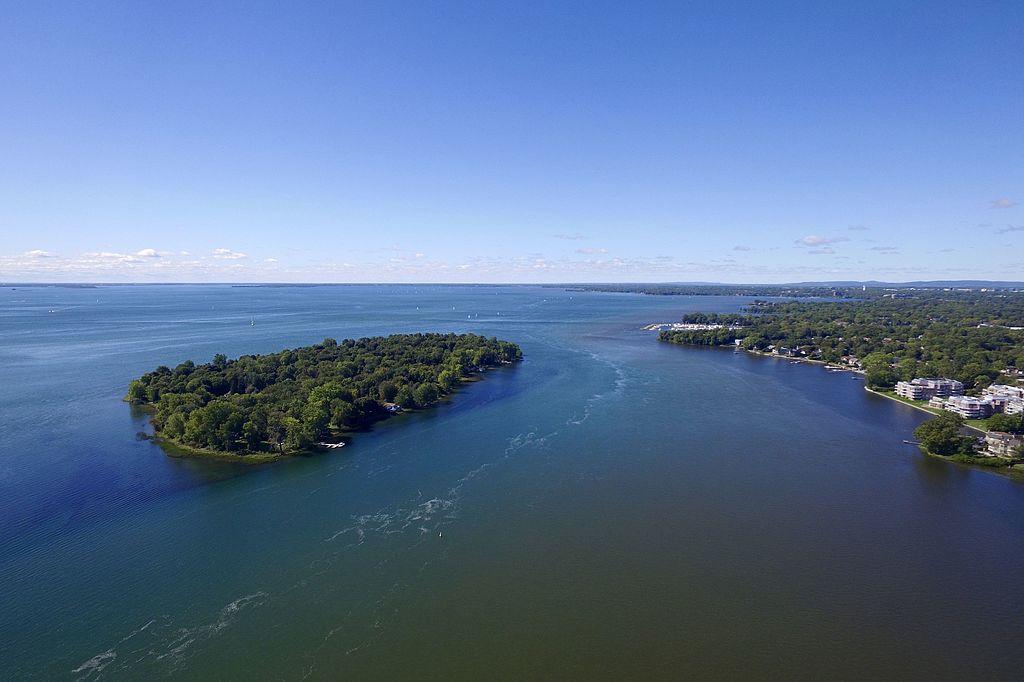 Hidden near the banks of the Prairies River, Bois-de-Liesse Nature Park is another example of pristine piece of nature within the metropolis of Montreal, unlike lawn based parks more common in the city center.
This 158 hectare park is home to a diverse ecosystem, particularly various types of birds, making it a magnet for bird-watchers, flocking to spot wild species who found refuge at this protected area, which partially encompasses woodland of rare black-maple trees along the Bertrand stream, teeming with aquatic fauna and flora.
What makes the park extremely friendly and safe for visitors is the network of stilted elevated trails connecting different parts of the forest, while keeping the nature insulated from any harmful consequences of people roaming around.
Interestingly, the park completely changes its face each season, most notably in winter, when trees are naked and the surface is covered by a thick layer of snow and during the spring, dominated by mesmerizing carpets of flowers.
The reception in Pitfield house offers courses and equipment rental for the multitude of activities available in the park, including snowshoes, sleds, ice cleats and even camping gear. 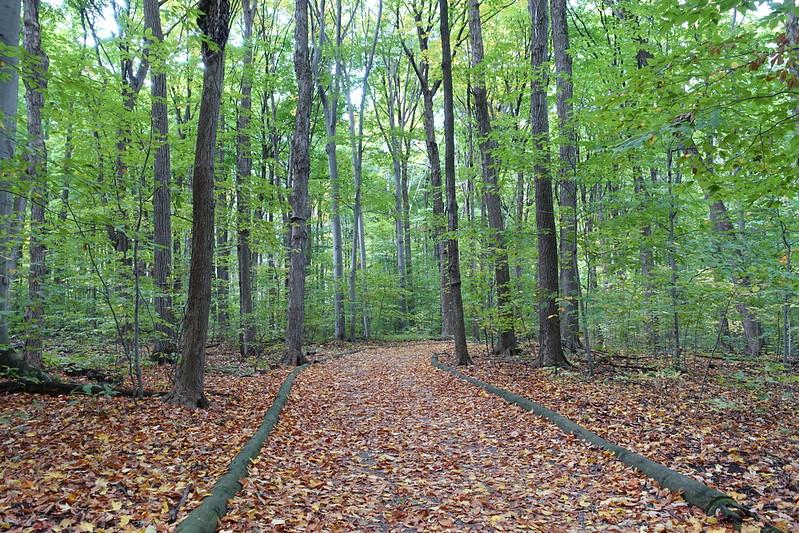 One of the forest’s path covered by fall leaves

As travelers, we usually don’t have the tendency to view hospitals as a legitimate tourist attraction, however, in some cases a medical complex can hold many architectural wonders, one such instance is Montreal Neurological Institute and the former Royal Victoria Hospital, located on the slopes of Mount Royal, in Golden Square Mile neighborhood.
Royal Victoria Hospital former building in 757 des Pins Avenue West might look like a medieval castle on the British Isles for unaware passerby, yet until 2015 when most of its departments relocated to the new campus, it was one of the city’s most important hospitals, internationally renowned for its pioneering research. The building’s exceptional multi-turret façade is a reflection of its founders heritage, two Scottish businessmen who paid a tribute for Queen Victoria jubilee by constructing a lavish hospital carrying her name.
Accompanying the medical complex further upwards is Montreal Neurological Institute, founded by the neurosurgeon Wilder Penfield, an architecture enthusiast who was inspired by his many world-voyages to construct a Neurological center, facilitating both patients recovery and workers efficiency by incorporating certain architectural elements, paintings, sculptures and decorations into the medical environment, resulting in a spectacular citadel-like edifice, spanning over the two sides of Rue University and linked by an iconic stone bridge. 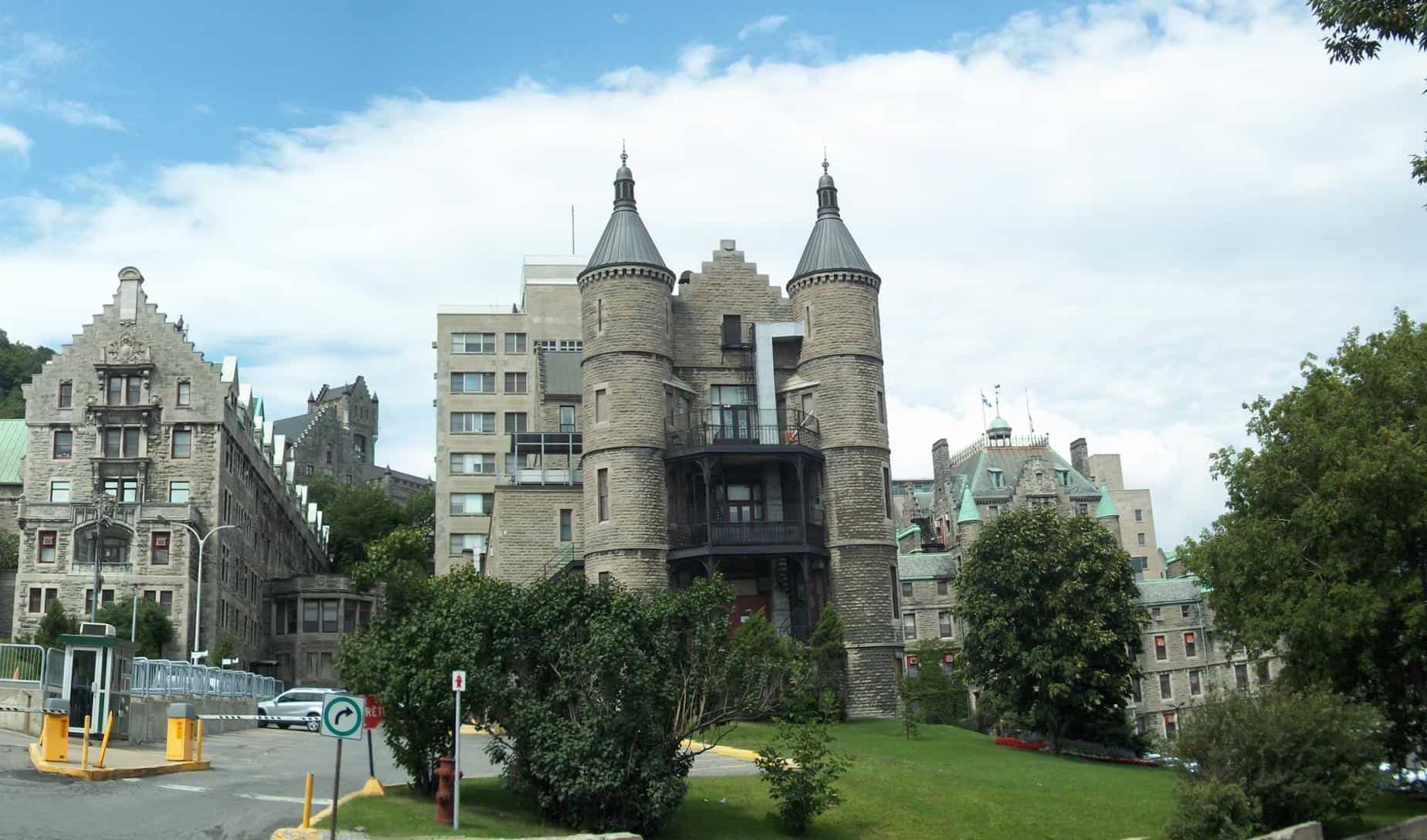 Ranked as the second largest university in Canada in terms of students number, The University of Montreal is a gigantic education and research powerhouse, encompassing 13 faculties and 60 departments. While its main campus is located at the foot of Mt. Royal and remarkably classy by its own right, the university maintains several more campuses throughout the city, one of which, the MIL Campus is still under construction up do this date (July 2020), yet parts of it, including the nearby network of plazas, gardens and bridges are already open for the public.
It might not seem trivial for travelers opting an academic institution as a must-see site, however, the brand new campus is an opportunity to experience an ultra-modern architecture brimming with vibrant student life, echoing through its five storey foyer, where visitors and academy members sit on the wooden stairs, watching the never ending commotion of laptop armed scientists sipping their cappuccino from the cozy campus cafeteria.
Facing the campus eastwards is Alice-Girard Plaza, a popular spot among local cyclists who occasionally ride on the elevated fountain, dodging the mini cold gazers, while others continue to the adjacent bridge that connects the campus with the nearby neighborhood of Park Extension.
Suffice to say that the campus itself is bestowed with many pleasant public spaces surrounding its glassy façades, perfect for architecture enthusiasts who wish spending a pleasant afternoon, exploring its premises. 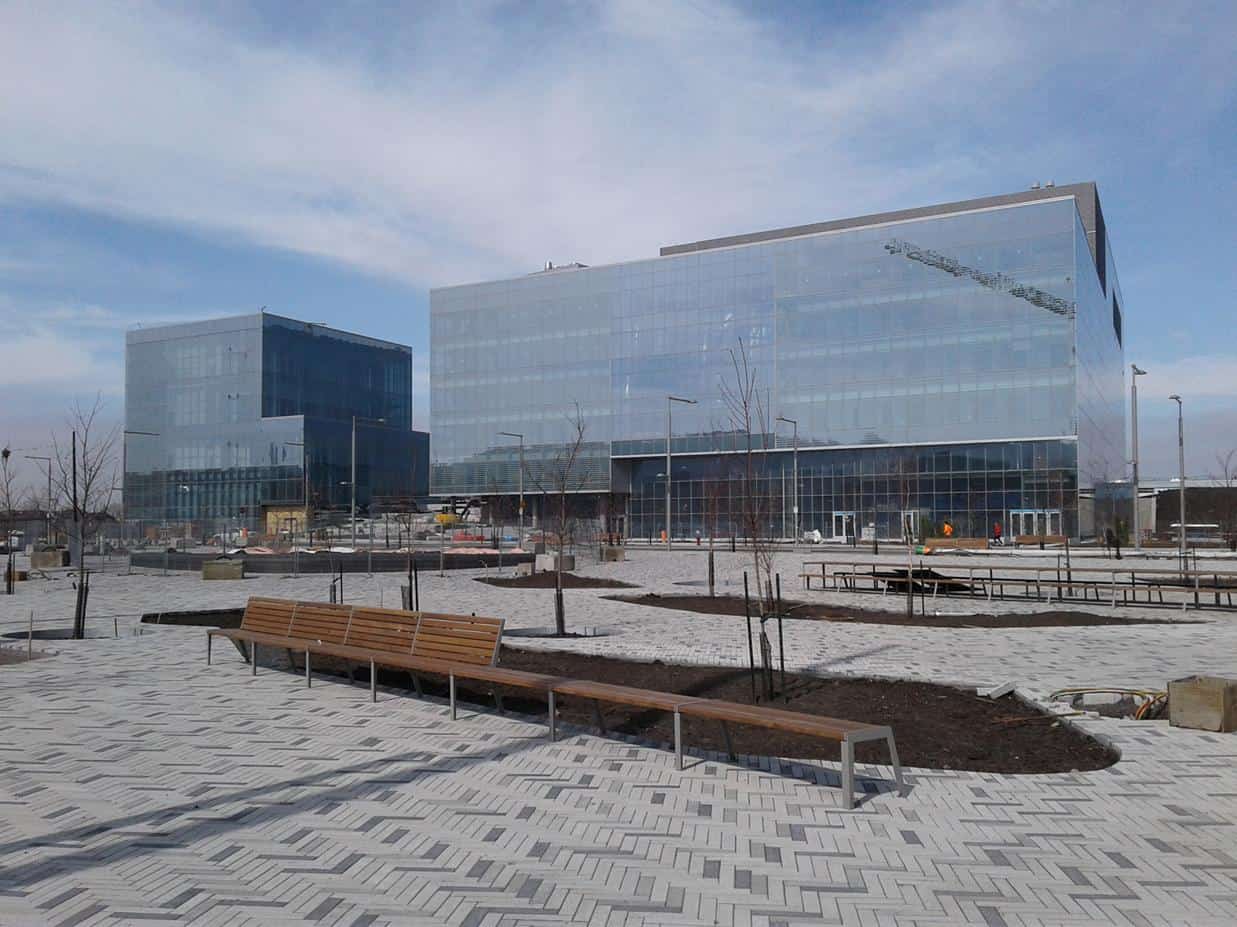 Surpassed only by Russia in terms of size, Canada is a vast country, blessed with incredible amount of arable land, making it a grain super power worldwide for over a century.
A clear epitome of its prominent role in global food production was the construction of several grain storage facilities throughout the 20th century, one of which is Silo no.5 at Montreal’s old port.
The extensive complex known as Silo no.5 is a sole extant example of large-scale granary in the city, standing as an emblem of another era. Originally, the Silo was built in 1907 and was expanded several times during the following decades, ultimately consisting of more than 60 individual silos from different times, interconnected by a series of hovering passages.
The chronological differences between the silos construction created an interesting hodgepodge of industrial architecture to awe it.
Following its operational cessation in 1994, the complex physical state deteriorated, falling victim to vandalism and negligence, while also providing a hot spot for graffiti artists.
The site is officially closed for visitors nowadays, yet for the adventurists among you, it’s possible to sneak in through a couple of fence breaches as exemplified in several Youtube channels, however, it’s important to mention that extra-caution is needed when exploring the site due to the lack of maintenance and regulation.
Alternatively, you can also easily appreciate the building from the outside, as it’s clearly visible from its immediate vicinity. 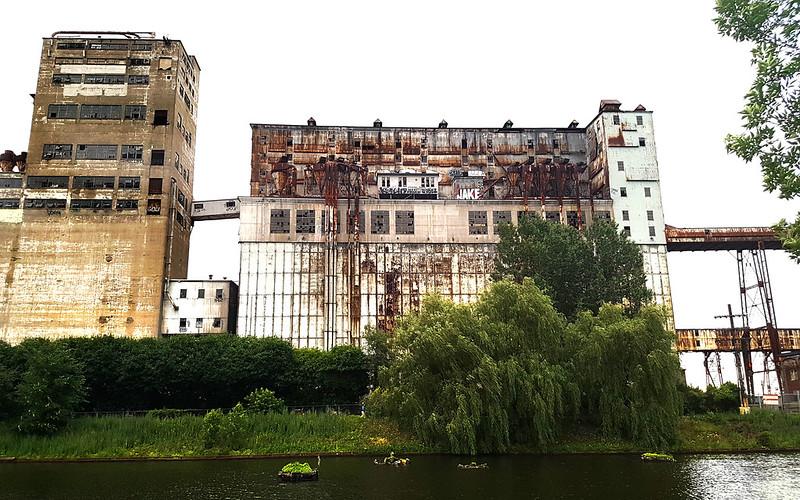 One of the unwritten laws of urbanism is the existence of a red-light district in large cosmopolitan cities, where prostitution, gambling, strip clubs and illicit activities are widespread. Apparently, Montreal is no different in that matter, having one of the most famous (or infamous) red-light districts in North America, culminated between 1920’s to 1960’s as a hub for cabaret shows, where some of the most renowned stars of that time started their career, performing in underground cramped night clubs, as far as possible from what we generally associate with celebrities.
Nowadays, the area is a mere shadow of what it used to be, though, there are still some cabarets and strip clubs, but unlike the 20th century, they don’t serve as a breeding ground for promising talents.
Giving a perspective of both its past and present, the Burlesque Walking Tour is an opportunity to learn about the district’s flamboyant history while strolling around its streets, visiting some of the most notorious brothels and strip clubs that once attracted dozens of partygoers. If you wish to later complement the tour with actual experience, the guide also covers the contemporary burlesque scene that currently takes place citywide. 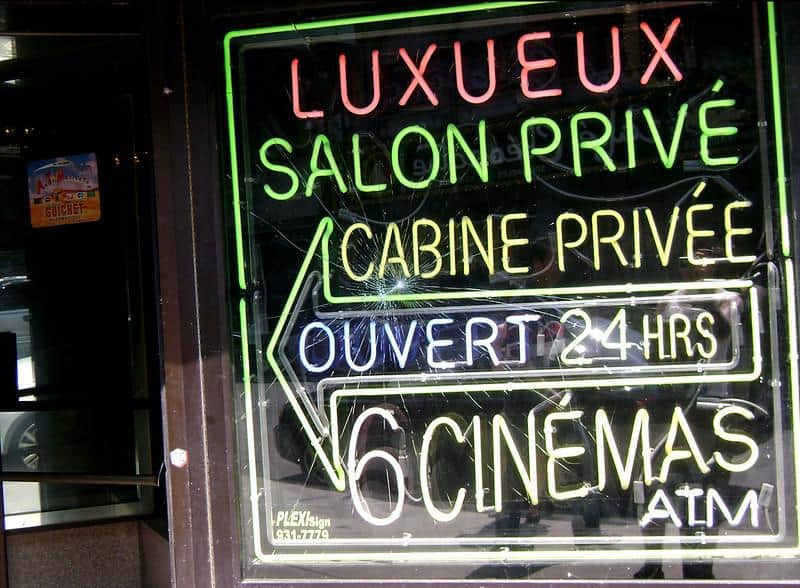